The Fashionable "Gentleman" Jang Dong Gun Greets Fans At An Airport In Beijing! 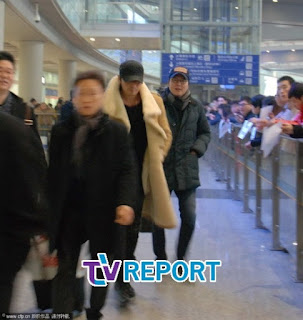 Gentleman actor Jang Dong Gun was seen dressed in a fashionable coat recently at an airport located in China.

On February 14th, a Chinese news media source reported the spotting of actor Jang Dong Gun arriving at an airport in Beijing.

According to the source, Jang Dong Gun was surrounded by many body guards and landed in China through the airport that is located in Beijing.

Jang Dong Gun was seen wearing an all black shirt and pants, styled with a hat and walker shoes. On top of that all stylish black outfit, he wore a long beige coat that topped off his amazing body proportions. He showed that he had style and showed off his airport fashion to many of his fans waiting for him by the gate.

On this day, Jang Dong Gun smiled at his fans and even shook hands with fans that approached him. He was praised by overseas fans for being such a gentleman and giving fan services.

Last year, actor Jang Dong Gun recently appeared in a movie titled "Dangerous Liasians" with the top Chinese star Zhang Ziyi, and Cecilia Cheung. He was praised by overseas fans and also left an impression to many Chinese viewers.