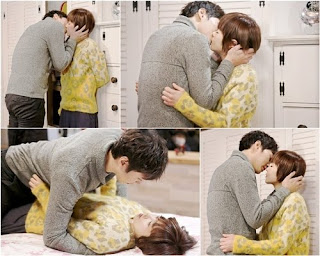 It looks like actor Joo Won and actress Choi Kang Hee will be having a kiss scene soon on the drama "Level 7 Civil Servant" after all.

On February 20th, MBC Wednesday and Thursday drama "Level 7 Civil Servant" showed a preview of a kiss scene between Joo Won and Choi Kang Hee. The kiss between this couple has been highly anticipated, and this will be their first kiss ever and will be shown on the 9th episode of the drama.

In the still cuts that were shown of them, different from her shy character, she seemed to have changed her personality. The two are always filled with laughter when they meet each other, but during their kiss scene, they seemed to be serious.

The still cuts of the kiss between them makes viewers wonder what is going on between them.

The producers of "Level 7 Civil Servant" said, "we received a great deal of questions asking when there will be a kiss scene between this couple. We made a great effort to make a good scene, and hopefully it will be one that is. Keep watching to see how the love between Joo Won and Choi Kang Hee further develops in the drama."