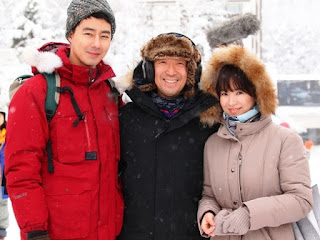 The main leads of upcoming drama “That Winter, The Wind Blows” posed for a picture in the cold temperatures.

On February 10th, the company producing the drama revealed the picture of the actors with the producer, taken when they when they filming early in the morning at Gangwon province.

In the picture, Jo In Sung and Song Hye Kyo friendly pose next to producer of the drama Kim Kyu Tae. They are wearing heavy winter clothing and all of the of them are warmly smiling despite the conditions.

It is said that the atmosphere on the set is a happy one. They help each other a lot and they have grown close. They also always cheer on each other.

An official from the producer company revealed, “The weather has been extremely cold this year, therefore it has been hard on everybody. Despite this, the actors and crew have been showing great support towards each other. It actually hard to find people like this. They are filming with a happy heart.”

Meanwhile, “That Winter, The Wind Blows,” will premiere this Wednesday February 13, on SBS at 9:55PM