Lee Kwang Soo and Haha Touch Each Others Behinds. 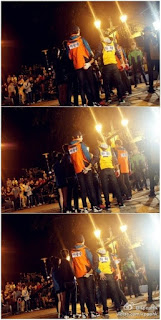 Pictures of the two were recently revealed in Chinese website Weibo, where they are teasing each other.

These pictures attracted attention because it shows their close relationship and their funny nature, even when the cameras are not following what they do, they still tease each other.

Netizens commented, "What are they doing?" "That is funny." "They are attacking each other." "They are close." and more.

“Running Man” cast went aboard to Macao, Vietnam and Hong Kong for a special episode.

The special episode will be aired on February 17th.