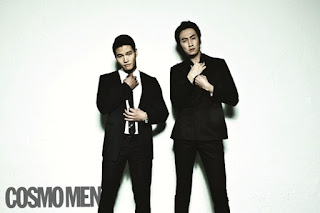 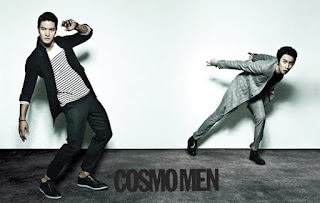 Actor Lee Kwang Soo and singer Kim Jong Kuk, posed together for a spread in the men fashion magazine.

The co-stars of SBS show “Running Man” left their charismatic characters behind and came together to talk about each other.

In the pictorial, the two are wearing elegant suits, high-fashion hair styles that gives them a sophisticated look, and are handsomely posing for the camera.

In the interview during the photo shoot, they were asked to describe each other, and Lee Kwang Soo started by saying, “We often see each other outside of “Running Man.” He treats me really well. I have never bought a meal for him.”

“He cares for me, and I really trust him. I think what he says is correct all the time.”

Kim Jong Kuk was also full of good things to say about “the giraffe.” He said, “Lee Kwang Soo is the most honest person I’ve ever met. I could lend him hundreds of millions of money. He is really kind.”

Their strong brotherhood, as well ad the rest of the interview and more elegant pictures will be published in the March Issue of Cosmo Men.