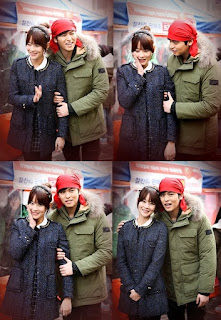 The actors of MBC "Oh Ja-ryeong is Coming," Oh Yeon Seo and Lee Jang Woo were seen having a date near a food tent.

They were filming for the drama and were having a great time. It was also said that a few lucky fans watching them on the streets were cast.

They seemed to look shy being next to each other, and revealed their cute and lovely couple pictures.