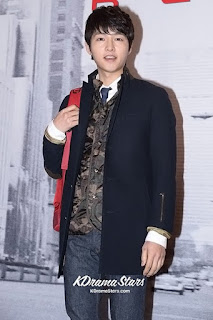 Actor Song Joong Ki has a generous heart, and gifts his manager with a car.

It was recently revealed that Song Joong Ki got his long-time manager a brand new luxurious car as a sing of his gratitude.

His manager, Kim Jung Young have been with the actor since he debuted as an actor and even followed him to his new agency Blossom Entertainment, a few weeks ago.

Now that the actor reached the top with his acting career in 2012, for appearing in the KBS drama “Nice Guy” and in the very loved, blockbuster movie “A Werewolf Boy,” he decided to show his appreciation in a cool way.

Meanwhile, Song Joong Ki is enjoying his success, and was named one of the actors to look forward to in 2013.