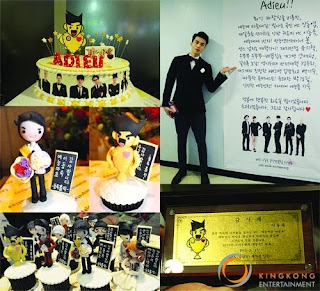 Actor Lee Dong Wook was given gifts prepared by his fans, for being part of “Strong Heart.”

His agency, King Kong Entertainment revealed a picture of the gifts the actor received on February 5th.

His fans gifted him with a prettily decorated cake and cupcakes with figurines of the different people who are part of the show and the French word adieu which means good bye.

He also received a big poster with messages written on them thanking him and wishing him good luck. Alongside that, he was given a plaque thanking him for being a good and handsome MC, who grabbed many woman’s heart in his run in the show.

Lee Dong Wook decided to leave the show, to focus on his acting career. He filmed his last episode of the show, in med-January, and it will air on February 12th.

The new show “Strong Heart 2” will have a new and improved format who will include the opinions of the viewers, as well as celebrities.

“Strong Heart 2” will air for the first time on February 19th, on SBS.