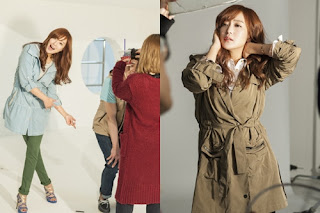 The photos of the behind the scenes from a clothing brand photo shoot were recently revealed.

In the pictures, she is wearing a trench coat with light blue pants and blue-and-gold high heels, showing a spring friendly look. She makes faces and flashes a big smile. In the other picture, she is in a more serious tone, striking a more dramatic pose, while in the middle of the photo shoot.

These non-Photoshopped photos shows her amazing wrinkle-free skin, and goddess looks. It is obvious that the years do no pass by the actress. She seems younger and happier than ever.

Meanwhile, Kim Hee Sun will make her debut as an MC in the new SBS show “Strong Heart 2” premiering on February 19th.