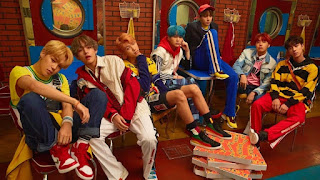 The top three songs remained the same as last week with BTS’ “DNA” being No. 1 for the third consecutive week. Only two music shows (“Inkigayo” and “Music Bank”) aired last week and “DNA” won both. Even though “DNA” has remained on top of our chart for three weeks, its winning margin has grown bigger each week! Congratulations again to BTS.

Holding steady at No. 2 and 3 respectively are IU’s “Sleepless Rainy Night” and Bolbbalgan4’s “Some.”

Speaking of Bolbbalgan4, they also have the only new song in the top 10 this week. Moving up seven spots to No. 5 and scoring their second hit in the top 10 on this week’s chart is “To My Youth.” This song is also from their mini-album “Red Diary Page.1.” Written by member Ahn Ji Young, “To My Youth” is a folk style ballad that comforts young people and gives consolation to all those who are suffering from the growing pains of life.

About the Soompi Music Chart

Soompi Music Chart is unlike any other music chart or television ranking. It takes into account rankings by various major music charts in Korea as well as the hottest trending artists on Soompi, making it a unique chart that reflects what’s going on in K-pop not only in Korea but around the world. Our chart is composed of the following sources: