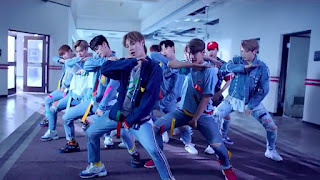 Some idols are absolute geniuses at providing fan service during fan signing events, but these idols take the cake.

According to many fans, Minhyun is the epitome of fan service at fan meetings and fan signing events.

When he’s given post-its with questions on them, he makes sure he answers every question, while still holding onto the fan’s hand and even affectionately rubbing it.

Fans voted V as one of the sweetest idols, especially at fan signing events, due to the loving gaze he has for each and every one of his fans.

Many fancams have captured the many faces of V when he talks with his fans, and even some non-fans claim they fell for him just after watching his fan signing event videos.

EXO’s Chen is another idol who melts his fans’ hearts with his loving gaze. In fact, in Knowing Bros, the other members revealed he was nicknamed the “fansign boyfriend”!

He always gives his fans a warm and welcoming smile, and even signs their album without breaking his gaze with them. What a pro!

Jungkook is another BTS favorite due to his adorable reactions and diverse facial expressions.

Some Korean fans claim his most legendary fan cam was when he was captured sweetly trying to calm down a crying fan.

Minhyuk is greatly appreciated by fans for his desire to talk with them as much as possible.

When he isn’t signing anything, fans have seen him trying to chime into conversations between the other members and their fans, or trying to steal fans from the member seated next to him.

According to fan accounts, Vernon tries especially hard to remember his fans’ names.

At one event, a fan noticed his palm was completely black, and when she asked him about it, he revealed he likes to write his fans’ names down on his hand.

Often, he’s able to remember them and even mentions them by their name at later fan signing events, shocking them with his incredible memory.