Running Man Jeon So Min Says She Has To Poop, Starts Crying 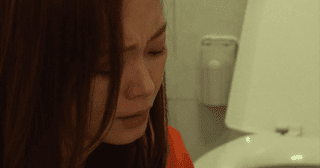 The Running Man members were preparing for their next relay mission when Jeon So Min suddenly excused herself and stood up.

Jeon So Min then revealed that she “had to go poop” and made the members flustered at the sudden confession.

The other Running Man members then started the mission while Jeon So Min went frantically to the bathroom to handle her “matters.”

However, it was later discovered that she was just faking the entire thing!

Jeon So Min was actually getting ahead with the mission and secretly preparing the mission in secret!

She started chopping up the onions she was assigned and started crying because of the onions but the outsiders thought it was from her toilet “matters.”

In the end, she successfully chopped the onions but couldn’t hide her tears from the onions!

Luckily, the others had no idea about her plan and kept thinking her pooping was the culprit of her tears.

Watch the full hilarious segment below!