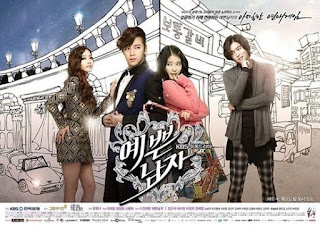 The cast of “Pretty Man” shared BTS stories and answered question during an interview with “Entertainment Relay”.

Jang Geun Suk began by sharing his character’s trademark line from the series. He said, “Am I beautiful,” which is a reference to Dokgo Matte as the most beautiful man in the planet. He quickly apologized for the greasy line by saying, “I know what you’re thinking. I think ‘Pretty Man’ is a drama that can turn my weakness into strength.”

Singer IU, who plays the role of Kim Bo Tong, was asked about her co-star Jang Geun Suk’s three charms, to which she answered, “He is pretty enough to alter history, he’s good at acting and he drives well.” The actor confirmed the facts by saying, “I think IU is an honest person.”

He also revealed that he used his own luxury sports car to fit his character’s elite stature. He shared, “There were a lot of car scenes for this drama, and my own car was featured.

The cast members were also asked to raise their hands if they think that they have the perfect visuals, and Jang Geun Suk, Han Chae Young and Lee Jang Wook raised their hands. IU stated the reason for leaving herself out and said, “I thought only Jang Geun Suk would raise his hand.”

Jang Geun Suk was asked why he decided to make a comeback through “Pretty Man” and he answered that it’s because of his character Dokgo Matte. He shared, I was worried about taking on another flower boy character, but after reading the script, I found Dokgo Matte as a dynamic and charming character.”

Watch the cast of “Pretty Man” every Wednesdays and Thursdays on KBS.