Pictures of The Last Filming of ?That Winter, The Wind Blows? Revealed 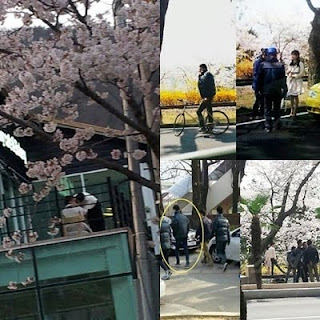 Stills of the shooting of the last episode of the SBS drama were revealed by netizens.

On March 31st, an an online community board, revealed pictures of the shoot that took place on Jinhae district in Changwon that same day.

In the pictures, Jo In Sung and Song Hye Kyo were spotted in a military camp, at a street full of Cherry Blossom trees, giving hopes of a happy ending.

The actors, are seeing getting ready to shoot. Jo In Sung is seeing riding a bicycle, while Song Hye Kyo is seeing in front of a taxi in the same street. They actors are also seen walking in the pretty street together. But perhaps the best picture of all, is of the one of the two characters kissing in a balcony.

People is hoping that this will be how their happy ending will look like, instead of a dream, like many K-dramas writers love to trick the public with.

The anticipation is even more, as the last episode aired on March 28th, didn’t give a preview. With these pictures, hopes of the viewers have gone up, and they are now expecting a happy end.

The mystery of the last episode will be resolved on April 3rd, when with 16 episodes, the drama will come to an end.