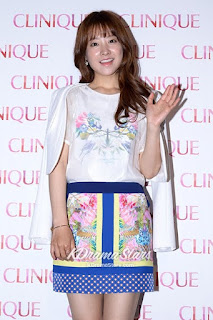 Actress Park Bo Young seems to be in the talks for a new movie role.

It was recently revealed that the actress is considering the role in the movie “Boiling Youth.”

Even though the contract is not signed yet, she is positively thinking about the role. Her agency said that the actress is “open to receive movie and drama offers.”

The movie which will be under director Lee Yeun Woo, who directed movies “Running Turtle,” and “2424” will be about a group of group surrounding an beautiful girl (Park Bo Young).

If the actress takes the offer, it is said that she will show a very different image, from the pure and innocent she has been portraying.

She has been very loved recently, for the role in the blockbuster movie “A Werewolf Boy” where she played the role of a girl who moved to the country due to her lung problems. While there, she find and falls in love with a wild boy (Lee Joong Ki), who is not a simple abandoned boy.

Meanwhile, she is recently came back from New Zealnd, where she filmed for the SBS reality show “The Laws of The Jungle.”