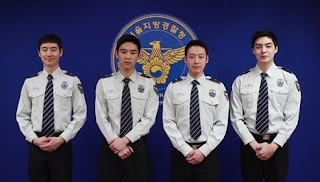 The actors appeared in a video uploaded to Youtube from the Seoul Regional Police Department, where they are serving their 21-month mandatory military service.

In the video, the actors introduced their recent short film called “Late Love” showed the movie, and talked about how it was filmed and produced.

The actors seem different with their haircuts, and neat uniforms. They even seem to have a younger appearance, than the one showed on TV.

Netizens who saw the video said, “They look really good.” “I miss you all.” “Hope your service is going well.” “The hottest policemen ever.” and more.

All of the actors enlisted in the military last year, besides Kim Joon that enlisted in 2011.

You can check the actors and the movie below.