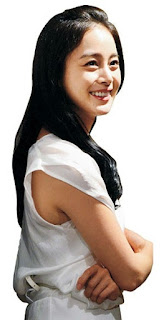 Actress Kim Tae Hee chose the Chinese historical film Wang Xizhi (王羲之) as her next work. While actress Kim Tae Hee has had numerous love calls from the national film production companies, she chose to become the main female character in Wang Xizhi, where over ten million dollars of production fee is expected, and start filming this June. Kim Tae Hee has filmed a Korean historical drama, the SBS drama called "Jang Ok Jung" last year, which is going to help her film another work based on history.