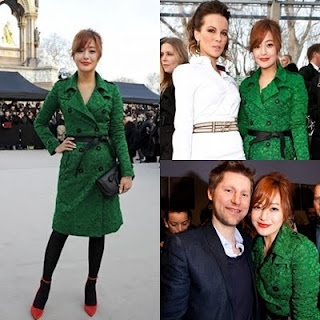 Actress Kim Hee Sun was present at the Burberry Fashion Show In London.

On February 18th, the Burberry Prorsum F/W 2013/14 fashion show was held at Kensington Garden and Kim Hee Sun was there as the only representative from Korea.

She was specially invited by the chief director of Burberry Creative, Christopher Bailey, whom she personally met at the event.

The actress also met British actress Kate Beckinsale, who she posed with for a friendly picture.

Meanwhile, the actress will debut as an MC on the SBS show "Strong Heart 2."