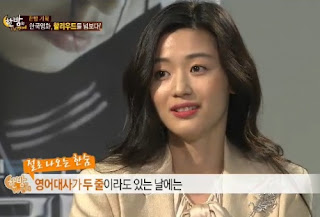 The actress appeared in the SBS show “Night of TV Entertainment” on February 20th and revealed she was felt pressured because of the English script on recent movie.

She said, “I was really worried about the English lines, even though it was only two lines, I was scared and really nervous.”

The actress is referring to her recent movie “The Berlin File,” where she played the role of an interpreter living in Berlin and sees herself involve in her husband’s (Ha Jung Woo) dangerous mission; however, she has a twist.

The movie itself has over 40% of the film in English, it was only natural for her to feel the pressure, specially since she is an interpreter.

“The Berlin File” premiered on January 31st in Korea and received positive reviews as well as surpassing the 6 million admissions in 20 days.

The film was also released in about 20 theaters in North America on February 15th and also received good reviews from the New York Times, and The Hollywood Reporter.