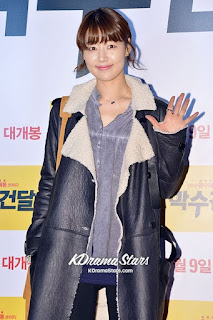 It was recently revealed that the actress have been cast to play the double role in “Gold, Appear.”

She will play the double role of Mong Hee, and Yoo Na who look exactly the same. Mong Hee, is street salesperson who is cheerful and hopeful. She dreams of being a jewelry designer. On the other side, Yoo Na is the daughter of a rich family.

About her casting, she commented, “When I read the scenario, I thought it was refreshing. I will try my best to portray the two roles with different feelings and expressions.”

There is still no word on the leading man role, actor Lee Jong Hyuk was once up for the role, but he decided to focus more on the MBC show “Daddy, Where Are You Going.”

“Gold, Appear” written by Ha Chung Ok (Pumpkin Flower), directed by Kang Dae Seon (My Name is Kim Sam Soon, My Princess, Damo, I Do, I Do) and produced by Lee Kim Productions, is family drama that will talk about the reality of a middle class family and their money problems.

The drama is set to premiere on April, after “Rascal Sons” ends.