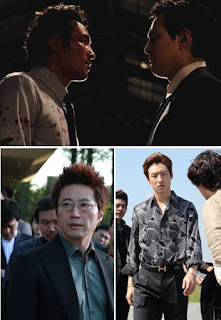 Currently, the movie "Shinsegae" is a big hit in the theaters in Korea and is staying in the first place for ticket sales. It is about a police officer undercover as a gang member.

February of last year, the movie "Nameless Gangster" brought in 472,000 people to the theaters and "Man On the Edge" this past January brought in 1,180,000 people. Even in the popular movie, "Gift of Room 7" features a gangster as one of the main characters. "Papparoti" that is scheduled to be released March 14 features a story about a high school student who becomes a gangster.

Throughout the years, gangster movies became a new genre of their own. For a long period of time, there were a lot of comedy gangster movies. In mid-2000 however, those movies stopped appearing for some reason.

The physical violence or violent language in "Shinsegae" is mild compared to other gangster movies in the past. Lee Jung Jae and Park Shin Yang appear in the movie wearing fresh suits, keeping things classy.

The reason gangster movies have become mild is the fact that they tend to influence our younger generation of viewers. Since some movies fail to provide enough satisfaction when justice fails to punish criminals, people feel satisfaction from gangster movies where people use violence to achieve their goals.

Gangster movies create an unrealistic fantasy for the viewers, but it also does not forget to send out a message about the tightly controlled society. This is one of the reasons why gangster movies are not very welcomed. It was announced 10 years ago that gangster movies cause violence, which still remains to be true today.