First Look at Oh Ji Ho and Kim Hye Soo for ?The Dignity of the Dispatch? 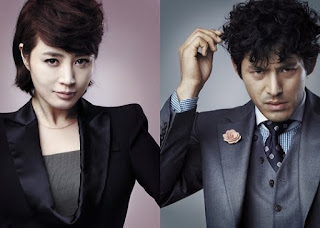 New posters pictures from “The Dignity of the Dispatch” were recently revealed.

In the photos, Kim Hye Soo shows a confident look, as her character is described ad being the best at her work. She wears a black silk jacket, with a gray shirt underneath, she looks strong, yet stylish.

Oh Ji Ho, on the other side, wearing a gray suit, with a fun pink rose, permed his hair, looks but nothing mad. In the drama, he plays the role of a high executive in the a company, and will often fight with Kim Hye Soo.

During the photo shoot, the actors showed their explosive personalities as soon the cameras were rolling. Kim Hye Soo showed a sexy, feminine charisma, while Oh Ji Ho showed his masculine look, with intense gazes. They perfectly matched, creating a perfect couple.

“The Dignity of the Dispatch,” also known as “The God of The Work Place” is about a mysterious woman who is a dispatch agent, and is perfect at everything she does. She will have a love/hate relationship with the very educated, high executive Jang Kyu Jik (Oh Ji Ho).

The drama is scheduled to start airing on April 1st, on Monday and Tuesday at 9:55 PM (KST).