First Look at IU in ?Lee Soon Sin Is The Best? 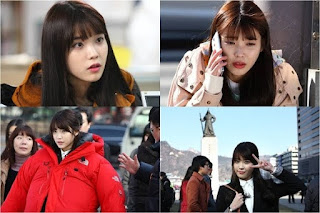 New pictures of the actress in the middle of filming were revealed on February 21st.

In the pictures, taken during her first filming schedule on February 19th, IU is seen performing her role in different locations.

IU showed impressive acting skills, and wowed the staff of the drama. She showed a bright and cheerful attitude while acting. In one scene she had to show emotion, and she was able to cry instantly with no problem.

She also had to film in Gwanghwamun in a suit and even though it was really cold, she did her best and had no NGs. After she was done, she took a charismatic picture in front of the statue of commander Yi Soon Shin.

The staff is also impressed with her passion towards acting, the production company said, “IU has been showing a lot of effort and commitment to acting. She has surpassed all of our expectations. I think we will be able to hit the 50% in ratings.”

An official from her agency also commented, “She is always showing her love for acting. Her determination is amazing.”