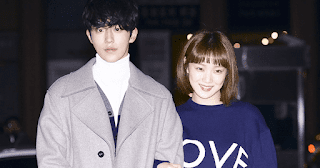 6 Couples That Broke Up In 2017 And Made Me, You, And Everyone Else Very Sad

And they truly seem to be keeping a friendly relationship because their Instagrams are still full of photos of each other.

Nam Joo Hyuk still has a photo from the drama where the two stare lovingly into each others’ eyes.

And Lee Sung Kyung kept the famous photo of herself piggybacking on his bare shoulders.

Fans noticed that Nam Joo Hyuk even kept photos of themselves outside of filming with the caption, “Bokjoo Forever”.

Lee Sung Kyung also kept the playful post of finding Nam Joo Hyuk in the midst of a basketball game.

Although it’s unfortunate that the Bokjoo couple has decided to part ways, fans are excited to see that the pair chose to remain good friends!