?You Who Came From The Stars? Director, ?Season 2 Could Be Possible? 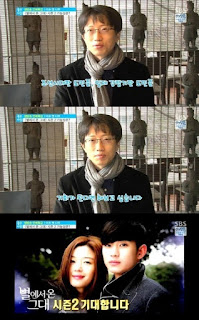 "You Who Came From The Stars" Director Jang Tae Yoo shared that season two of the drama could be possible.

In the SBS "Good Morning Entertainment News," which aired on March 3, 2014, producer Jang Tae Yoo of the recently ended popular SBS Wednesday Thursday drama "You Who Came From The Stars" made his appearance. Producer Jang Tae Yoo in the interview showed positive response toward the possibility of making the subsequent season for "You Who Came From The Stars." Producer Jang Tae Yoo said, "I would have to speak with the scriptwriter, but I think it could be possible that we film the subsequent season." He then added, "Do Min Joon has lived through Cho Sun dynasty, the Japanese occupation period, and in the early 1970s. Chun Song Yi could not be the first love for him on the earth. If I get a chance to, I want to challenge myself in filming the second season."