Yoo Ah In Reveals He Will Become a Bad Guy on?Jang Ok Jung? 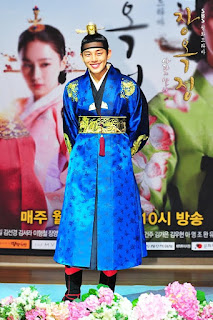 Actor Yoo Ah In says King Sukjoon will be seen as the bad guy of the drama.

On the event, Yoo Ah In talked about what his character will show the public, he said, “King Sukjoon will struggle and agonize with his love for Jang Ok Jung, as well as being a powerful figure. Because of this he will be seen as a bad man.”

He added, “at first, it was hard for me to understand him, I couldn’t follow him. I wasn’t able to pull his attainable look. I started to worry a lot about it. I always take a new character in a drama, as a challenge, and now I will try my best to perform and show my own King Sukjoon.”

Director Boo Sung Chul, praised the actor saying, “Yoo Ah In was the only one I thought was going to be able to play the role of King Sukjoon. He and I met a lot, and I want to thank him for showing such strong charisma on set evey time.”

Yoo Ah In also made a promised, and said that if the drama was able to tech the 30% of ratings, he will do the horse dance on Twitter.

"Jang Ok Jung" will premiere on April 8th, at 10PM (KST), and will air every Monday and Tuesday on SBS.