Yeon Jung Hoon Says He Is Used To Divorce Rumors 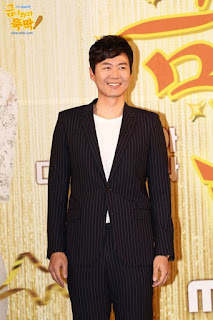 Actor Yeon Jung Hoon reveals he is already used to all the bad rumors his marriage have been involved in.

The actor attended the press conference of upcoming drama “Gold Appear” held on April 4th, at the 63 City in Yeouido, Seoul.

At the event, the topic of recent divorce rumors came out and the actor said, “It has been over 10 years since rumors like this have appear. Since the years we were dating, rumors always followed us. By now I am already used to them.”

He continued, “Once my sister called me worried about the rumors, but I told her not to worry about pointless rumors. Actually my wife was the reason I am doing this drama. She chose the drama, and told me to do well, and gain a lot of money from CF deals.”

The actor is back to from private cable channels to national channels after 3 years. He have been working on dramas (Vampire Prosecutor, Can Love Become Money) and as a host of XTM show “Top Gear Korea”

In “Gold Appear,” he will play the role of Park Hyun Soo. He is the CEO of a large jewelry company, owned by his parents.

“Gold Appear” is a family drama that will talk about the reality of a middle class family and their money problems, as well as exploring love and marriage. The drama is set to premiere on April 6th at 8:15PM (KST) on MBC.