TVXQ Will Make A Cameo in Japanese Drama 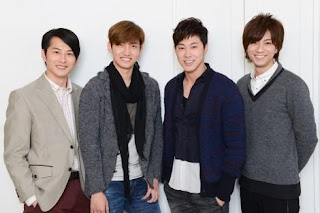 U-Know Yunho and Max Changmin of boy group TVXQ will appear in a Japanese drama.

It was recently revealed that the singers will make a small cameo in the drama “Saki” starring Yukie Nakama, and Shohei Miura.

U-Know Yunho and Max Changmin will act as costumers in a cafe, where Hayato Nitta (Shohei Miura) and Toshiya Iwaki (Hideo Ishiguro) go to as reporters to do a story on the cafe.

Their small cameo can been seen in either episode 9 or episode 10 to be aired on March 5th.

"Saki" is about a apparently sweet woman, who seems to be the perfect woman, who works as a nurse, and is really beautiful, but she hides s darker side of herself that seduces and terminates men.

The drama airs every Tuesday on Fuji TV at 9:00 PM (Japan time).

Meanwhile, at home, U-Know Yunho acts as Baek Do Hoon in “Yawang” as the innocent, and sweet son of a rich family, who falls in love and marries the ambitious, and manipulative Joo Da Hae (Soo Ae).