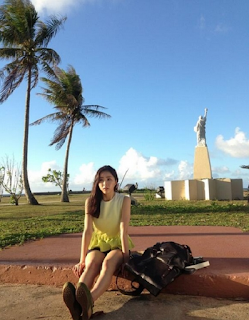 Actress Shin Se Kyung shows a picture of herself in Guam

On March 20th, the actress uploaded a picture on her me2day and wrote, “Seoul is so cold. Guam so hot.”

In the picture, the actress is seated on the floor, wearing shorts, a simple yellow shirt and olive wedges. As her background, she has a perfectly clear, blue sky, palms trees and the statue of a historical figure. She seems like she has a surprise expression.

Netizens who saw the picture commented, “She is beautiful.” “her beauty matches the beautiful background.” “I am jealous.” "I wish i was in vacation too." “Her skin is flawless” and more.

The actress was in Guam last week for shooting of her new MBC drama “When a Man Falls in Love” alongside cast mates Song Seung Hun, Yeon Woo Jin, and Chae Jung Ahn.

Her co-star Song Seung Hun, also updated fans with sexy photos of the actor showing his toned figure while in the beach.

Meanwhile, her drama "When A Man Falls In Love" will premiere on April, after "Level 7 Civil Servant" ends.