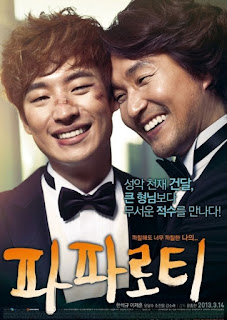 Movie “Paparotti” premieres with good numbers in the Box Office.

According to the Films Commissions Statistics, “Paparotti” came at third on the day of its premiere, March 14th, selling 59,554 for a total of 82,940 tickets sold.

The movie was behind Hollywood movie “Warm Bodies” which also premiered on March 14th. “Warm Bodies” recorded 77,100 for a total of 80,432 audiences.

The Hollywood movie beat “The New World” which has been dominating the box office for about a month since its February 14th, release. “The New World” came at second drawing 63,390 people for a total of 3,637,708 sold tickets.

Behind all of them, was the hottest movie in Korea right now, “Miracle in Cell #7” on this day, the blockbuster movie recorded 24,961 of tickets for a grand total of 12,304,499. With this number, the movie is now the 4th best selling movie in Korean history. The movie beat “The Kind and the Clown” and “Masquerade.”

“Paparotti” is about a talented, but troubled high school student Jang Ho (Lee Jae Hoon), who meets a music teacher who becomes his life mentor.