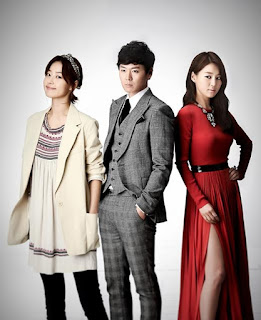 In the picture, leading female role Han Ji Hye portrays two very different roles. One is of Jung Mong Hee. A cheerful, and positive girl, who is a street salesperson, and dreams of being a jewelry designer dressed in the white dress, with short hair a happy expression.

The other one is Yoo Na, the daughter of a rich family, who is cold and arrogant dressed in a fashionable red dress, with an imposing attitude. Han Ji Hye looks like two different people, as she is dressed very differently with different feels.

Yeon Jung Hun dressed in a neat plaid, gray suit will play Park Hyun Soo, the CEO of a big jewelry company who was married to Yoo Na and divorced her, and then falls in love with Jung Mong Hee.

“Gold, Appear” written by Ha Chung Ok (Pumpkin Flower), directed by Kang Dae Seon (My Name is Kim Sam Soon, My Princess, Damo, I Do, I Do) and produced by Lee Kim Productions, is family drama that will talk about the reality of a middle class family and their money problems. The drama is set to premiere on April 6th.