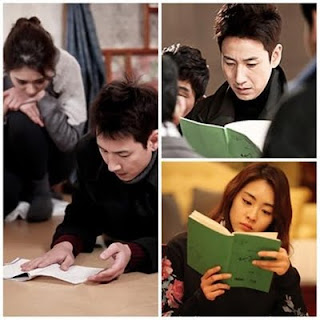 While other stars are celebrating the Lunar New Year with their families and friends, the cast and crew of "Miss Korea" opted out of the vacation to focus on the drama instead.

"Miss Korea" revealed photos of main cast Lee Yeon Hee and Lee Sun Gyun are while they are studying their respective scripts, showing their dedication to the drama despite the holiday. It was also reported that all the actors, actresses and members of the production crew gave up their vacations as well, and spent the holiday supporting each other while working hard to create the drama.

According to a drama representative, "Lee Yeon Hee, Lee Sun Gyun and the rest of the "Miss Korea" cast and crew will be spending their Lunar New Year holiday with the viewers, so please show them your love and support."

Catch the hardworking cast of "Miss Korea" every Wednesdays and Thursdays on MBC.