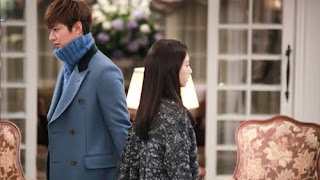 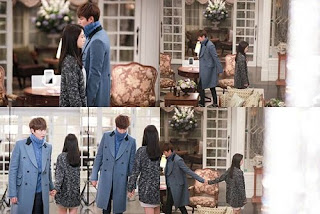 After giving fans several adorable moments and a donut kiss, it may seem that everything is going well for Kim Tan and Cha Eun Sang, but with a love story as tragic and complicated as theirs, it’s still a very long and tearful way to the happy ending.

New still cuts from the November 22 filming reveal Lee Min Ho and Park Shin Hye with their backs turned against each other but still holding hands. Standing in the middle of the Kim Mansion, Lee Min Ho is seen walking past Park Shin Hye, eventually letting go of her hold and leaving her completely.

In the drama, Kim Tan promised Cha Eun Sang that he will remove all obstacles so that she may walk whatever path she wants, but in the new photos, they both look pained and regretful as they part ways, even while desperately trying to cling to one another.

To find out what happens to them, catch “The Heirs” every Wednesdays and Thursdays on SBS.