Lee Min Ho Breaks Down In Tears For ?The Heirs? 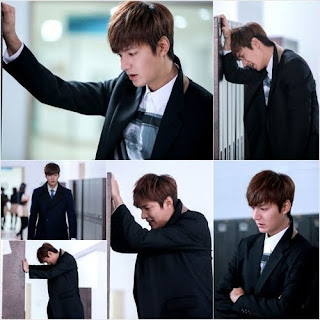 As they say, “He who wishes to wear the crown must endure its weight.”

It seems that this is exactly what is happening to Lee Min Ho’s character Kim Tan in the drama "The Heirs". After the several episodes of enduring his family problems and holding on to the love of his life Cha Eun Sang (Park Shin Hye), the unfortunate heir can’t help but get emotional and breaks down because of the hardships and struggles that he is facing.

During the November 24 filming of the drama, main lead Lee Min Ho is seen silently shedding his tears in a deserted school corridor. He will soon be facing his older brother Kim Won (Choi Jin Hyuk) in their battle for the inheritance, and at the same time, his father has given Cha Eun Sang two difficult choices to make, both of which involves leaving Kim Tan’s side.

According to drama representatives, “In the drama, Lee Min Ho accurately and sincerely portrays his character’s conflicted and intense persona through his charismatic acting. The viewers can’t help but watch him, so please look forward to the passionate romance of the elite as “The Heirs” reaches its conclusion.”

Watch Lee Min Ho in “The Heirs” every Wednesdays and Thursdays at 10:00PM KST on SBS.