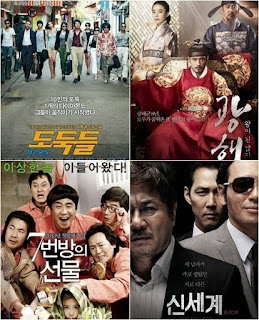 Various movies that have been released already have been an incredible hit. The share for Korean movies in February was 82.9%, the best record in 7 years.

This is the best record in the past 7 years. Back in October of 2006, approximately 85.3% of purchased tickets were for Korean films. The Korean film "The Gift of Room 7" was visited in theaters, in one weekend by over 1,000,000 people and about 700,000 people went to see "The Berlin File". It seems as though the Korean film industry is experiencing another term of the renaissance for the first time after 7 years.

The number fluctuated between 60~70% throughout the rest of the year 2012 with the help from "Thieves" and "Gwanghae, The Man Who Became King." Both movies received over 1,000,000 ticket sales in a weekend.

As impressing as it is, it is very ironic as well. In January 2006, officials announced that the screen quota days will be shortened to 73 days instead of the usual 146. The change went into effect in July, facing strong opposition from people in the movie production industry. The United States had requested Korean officials to shorten the screen quota days by a half. When the request was accepted, filming professionals claimed that Korean films will be completely slashed by American films and continued to protest against the change in the screen quota days.

7 years later, the Korean Film industry is experiencing a movie boom. The voices that tried to fight against the shortening of the screen quota days were nowhere to be heard. There are also comments claiming that Korean films are swallowing up all the tickets sales. Professionals in the Korean film industry conclude that they have matured significantly since the change in 2006. The leniency that improved for foreign films have motivated Korean film makers, which resulted in the opposite outcome: success.