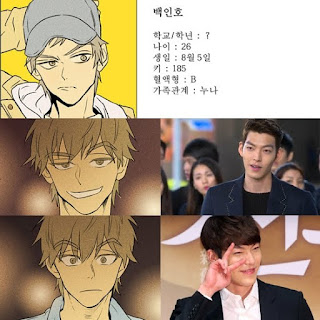 "One source, multi-use" is not an uncommon term in the media. There are books remade as movies, and foreign movies remade into new movies. What is the most important in these remakes are the synchronization of the original characters and the actors. In an artificial casting of actors for the drama based on a comic book "Cheese in the Trap," actor Kim Woo Bin was casted as one of the main character.

The popular online comic book "Cheese in the Trap" is a story of the three main characters, Hong Sul, Yoo Jung, and Baek In Ho, who are college friends. Actor Kim Woo Bin was casted for the role of Baek In Ho, who is a good looking man with a temper. He used to be a pianist when he was younger, but he hurt his fingers in an accident and does not play the piano anymore. He works a lot of part time jobs to support himself. He was casted for the role of Baek In Ho because of his character in the popular SBS drama "The Heirs." In "The Heirs," Kim Woo Bin played the "bad boy" character, who also had a deep wound in his heart.