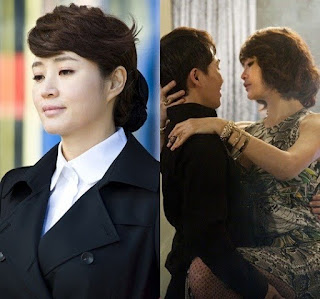 On March 21st, KBS released new stills of the actress shown that she is now a hot salsa dancer. For the character in the upcoming KBS drama “The God of The Work Place” the actress have been playing different roles.

Her character, “Miss Kim” described as the perfect worker, is an office worker on the day but at night, she becomes a professional salsa dancer.

In the stills, the actress wears a skin-tight dress, that shows her voluptuous figure, and sexy silhouette, even under the dim light. She slowly became a dancer, guiding her movements to the rhythm of the music.

The actress actually have been taking salsa lessons to perfectly live up to her role of a pro salsa dancer. She commented, “I have never tried dancing salsa, and it was so much fun. The choreographer, made a up a dramatic dance routine, i think the scene will come out great.”

Besides a salsa dancer, the actress have also transformed in to a full fighter, that speak really good spanish and an engineer for the role in the drama.

“The God of The Work Place” will start its run on April 1st, taking over the Monday-Tuesday slot currently occupied by "Advertisement Genius Lee Tae Baek"