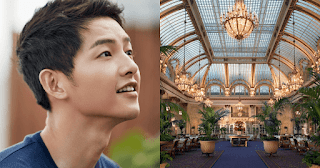 (Photo : OnStyle ) Jo In Sung is the recipient of the 2014 Style Icon of the Year award.

“It’s Okay, That’s Love” star Jo In Sung has been named the 2014 Style Icon of the Year. Kim Soo Hyun maintained the largest percentage of the fan vote for the awards at 6.5% but was ultimately defeated by Jo In Sung. The 2014 Style Icon Awards were held at the Dongdaemun Design Plaza in Seoul on October 28.

Earlier in the evening, Jo In Sung received a Style Icon Award as the Icon of Healing. Jo In Sung witnessed an increase in his popularity in 2014 due to his role as Jang Jae Yeol, a schizophrenic writer in “It’s Okay, That’s Love.”

Jo In Sung expressed his joy upon receiving the award stating,"I think this is especially meaningful."

There were a total of ten style icons who were recipients of awards during the evening.  Style Icons were selected from a total of fifty candidates. Prior to the awards, the top twenty nominees from the results of fan voting were revealed on the Style Icon Awards website.

Sung Joon and Han Groo were the recipients of the first New Icon awards in recognition of their recent performances in Korean dramas.

Sung Joon has become an icon for romance through his captivating K-Drama roles. He won over the hearts of K-Drama viewers in 2014 with his stirring performance as Joo Won opposite actress Kim So Yeon in “I Need Romance 3.” He followed with his role as the conflicted doctor Nam Ha Jin in “Discovery of Romance.”

Han Groo stirred up the empathy of Korean drama audiences with her frank portrayal of Joo Jang Mi in the 2014 tvN drama “Marriage, Not Dating.”

Go Ara was recognized for her past performances which included the Sung Na Jung in “Reply 1994” and Eo Soo Sun in “You’re All Surrounded.” She entered to an electronic rendition of MGMT’s “Kids.” Go Ara tearfully accepted her award while thanking her fans.

“My Love From The Stars” and “Doctor Stranger” star Park Hae Jin accepted the K-Style award leading in to the presentation for Kim Soo Hyun.

Kim Soo Hyun, who received the highest percentage of the fan vote, was not present to receive his award. Fans of the actor were saddened to hear that he was not the recipient of the Style Icon of the Year award.