Jang Nara Finishes Drama in China, and Returns to Korea 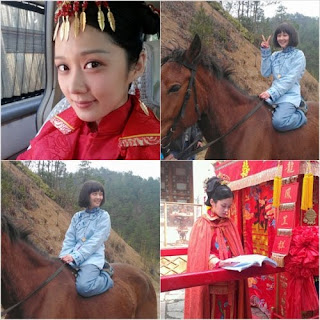 On March 14th, her agency JangNara.com said, “She did her best for the Chinese who have been supporting her since the start. She was able to successfully finish the drama.”

They also revealed that the actress was back home after shooting for “Red Palanquin” for about a month.

The actress had pull an all-nigher on March 13th, to finished on time. On this day the actress had an action scene in a horse, and didn’t use a stun man. Even though she was tired from not sleeping, the actress said her goodbyes to everyone on the set.

Her agency also revealed, that the actress has many activities planned for her Korean loyal fans. In early May, she will hold a fan meeting to meet her supporters.

Besides the fan meeting, there is going to be a “Jang Nara Film Festival” which will portray her dramas and movies from the past 12 years.

In “Red Palanquin” she plays the role of Riti the daughter of a second wife, who was born with 6 fingers. She was always cast out by her family, but after she takes charge of the family business, of planing weddings, she became very successful.