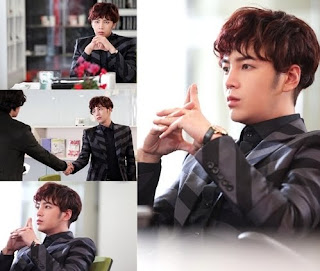 Actor-singer Jang Geun Suk is known for the rebellious long locks. For several years and dramas, he has kept his hair the same, but for the sake of his new show “Pretty Man”, he cuts his hair short for the first time in four years.

In recent still cuts, Jang Geun Suk is seen with shorter and curlier hair, a different style from his long and wavy locks in the first two episodes. His character Dokgo Matte found out something important about his past, and his change of style is reflective of this new side of himself.

Meanwhile, in an interview with Entertainment Relay, Jang Geun Suk talked about cutting his hair, and co-star IU’s reaction towards it.

When IU was asked what her feeling was when she cut her own hair for the role, she said, “It feels good and light. Personally, it feels comfortable.” As the reporter went on to ask Jang Geun Suk a different question, he expressed his jealousy and said jokingly, “You should ask about my hair as well. I cut it off after four years.”

He asked IU about her reaction to his hair being cut. “How did you feel after I cut my hair,” he asked, to which IU answered, “It’s like a load lifted off your shoulders.” Not satisfied with her answer, he asked again, “How did you feel about my hair before I cut it,” and she hilariously answered, “I wanted to cut it so badly.”