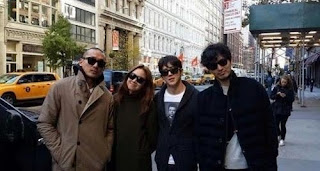 With the news of top stars Gong Hyo Jin and Lee Jin Wook going out, it has been found out that the two had met for the first time at the "Korean Film Night" in New York City.

In November of last year, C J Group hosted the "Korean Film Night" at the Museum of Modern Art in New York City, and Gong Hyo Jin and Lee Jin Wook met at the event for the first time. An online community shared a picture of the two with actors Ha Jung Woo and Go Soo at the "Korean Film Night" festival. In related news, the agencies of Gong Hyo Jin and Lee Jin Wook confirmed that they are going out.