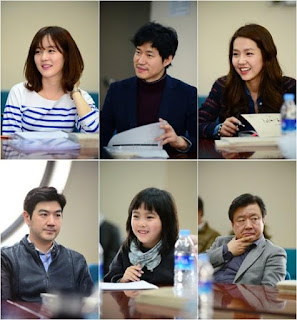 Casts and crew from Upcoming SBS drama “The Birth Secret” got together for the first time.

The event took place the day before, march 24th, at the SBS Tanhyeon Production Center located on IlSan, and the atmosphere was cheerful and relaxed.

Sung Yu Ri and Lee Jin who used to be part of the first generation idol girl group Fin.K.L. are working together on this project, which makes the first drama, the former idols will be working on together. At the reading, they sat next to each other and showed their long lasting friendship.

It is said that the drama is hoping to have the rest of to Fin.K.L. members, Lee Hyori, and Ock Joo Hyun make small cameos to have the complete group in one drama.

"The Birth Secret” is about a woman who suffers from memory loss, and meets a man (Yoon Joon Sang), that will help her regain her memories. This man is non other than her husband. She will struggle to remember him and their young daughter (Kal So Won), who happens to be just like her mom. All the while a big secret will be revealed.