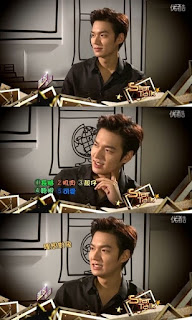 He said on his character in the movie "Kang Nam Blues," which he is currently filming, "The character has a lot of difficulties. It is the complete opposite of the characters I have done in the past." He added, "The audiences will be able to feel a new side of me." He said on marriage, "Because marriage is for the rest of my life, I think it will be more enjoyable if I married a person who is like a friend, as opposed to marrying for passionate love."

Actor Lee Min Ho became popular in China since his lead role in the popular SBS drama "The Heirs," which aired last winter. Recently, he was named the number one actor who "made the Hallyu wave in China vigorous" by a Chinese news media.